A group of 10 Millridge parents spent the previous Saturday installing the equipment after the school received a grant from a non-profit organization known as Kaboom.
Tracey Ricchiuto, a mother from the school, submitted a proposal for the grant. With the approval, Kaboom required the funds be matched by the school.
"A Mile-4-Millridge," a fundraising walk in May, raised $9,200, which provided the school with its half.
"The equipment that was here was old and rusty," Ricchiuto said. "With good equipment to play on, the kids have fun and go back to the classroom more focused."
The other stipulation was family from the school handle the installation as part of a "community build."
So, after some preparation earlier in the week, the parents, along with both principals, Lou Kindervater and Mary Myers, got to work. 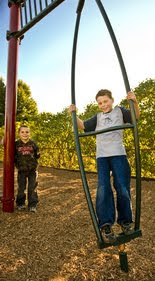 "It starts out slow with digging and drilling," said foreman Mike Seredich of Snider and Associates, the Kaboom approved contractor that was required to be on site. "After that, the actual installation of the equipment goes quick."

After nearly eight hours the installation was complete. A variety of new equipment was in place, including Tether and Funnel Ball games, and a Bing Boing. The F-2 Spinner would prove to be the new favorite as children lined up awaiting their turn on the night of its opening.
"The effort here is what makes the schools and this community great," said Dan Greve, a parent who helped with the installation. "It’s about giving back and this shows pride and ownership."
Posted by Jeff at 11:54 AM

it is good to readaybabg

I totally agree with this article and I just want to say that this article is a very nice and very informative article.I will make sure to be reading your blog more. Construction Salaries

I certainly appreciate every last piece of it. It is an extraordinary site and has a pleasant offer. I need to bless your heart. Great job! You all do an extraordinary blog and have some incredible substance. Keep doing awesome. Commercial Playground Equipment For Sale

Great blog ! I am impressed with suggestions of author. Midtown Miami Preschool

I am thankful to this blog giving unique and helpful knowledge about this topic. Preschool Coral Gables

Impressive and powerful suggestion by the author of this blog are really helpful to me. Elementary Brickell